Usine Studio is a design consultancy firm that offers services aimed at the end to end design of spaces. We have a very contemporary outlook towards design and believe in working with clean lines and simple forms.

We believe that any space should be a reflection of its occupant's lifestyle. Because of this belief we are dedicated towards making spaces that not only look good, but work which is why we place a lot of stress on functionality and context.

We are dedicated to innovation and creativity and are continuously looking at ways of experimenting with materials in our designs.

One of our key strengths is our meticulous attention to the execution of our designs so that our clients are assured of the highest quality. 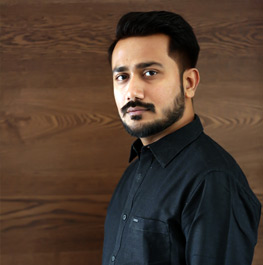 Upon graduating from the class of 2003 and 2006 of the N.I.F.D., Baroda, Respectively, they immediately began garnering experience and expertise alike by Working consistently as Senior Designers under the aegis of a well-established Architect in Baroda. They worked on several residential, commercial and retail Projects, many of which went on to be published in leading magazines.

They both came together to form USINE studio: their creative workhouse, in April 2010, which is steadily emerging as one of the leading and most sought after Architectural & Interior Design firms in the city.

Good design should always be creative, imaginative & artistic, yet keeping in mind all functional concepts.

USINE studio believes that every space deserves to become a poetic response to its context and at the same time be a living reflection of the people who inhabit it. We work with clean lines and sharp, uncomplicated forms; thus maintaining a Distinctively contemporary approach.

At the crux of our working strategy lies the idea that whatever we design must be unique and specialised in its expression; and this fuels us to constantly strive for innovation and experimentation with materials.